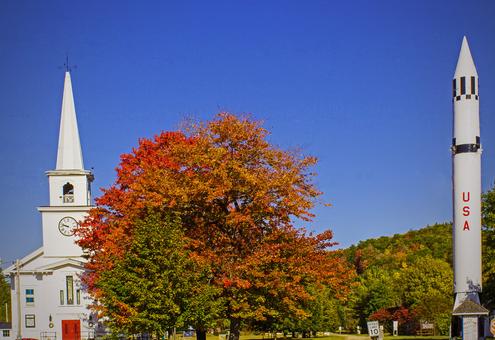 I dedicate this page to Henry Theodore “Ted” Asselin

One of the most frequently asked questions we get here in Warren, other than people asking for directions of course, is why? Why is there a huge, 73' tall missile in the center of town?

Although some of the locals may have some fun telling a wide variety of stories to our visitors, like it simply landed here, or that we woke up one morning and there it was..... or, well, you get the picture.... however, there really is only one true story...........

In 1970, while stationed with the Army at Redstone Arsenal, Alabama, Ted Asselin noticed a number of Redstones lying in a field. He found that they were made obsolete and were surplus. The Redstone that is now in Warren, had been stripped of its engine, guidance control package, etc., and had been used for display purposes. Ted thought of the children of Warren, who were far removed from America's space program, except for what they may see on television. Ted figured that seeing the real thing might interest some child in science or the space program itself. ...And well, the fact that Astronaut Alan B. Shepard Jr. was originally from New Hampshire - why not take one to New Hampshire!?

Checking with US Army at Redstone Arsenal, Ted was informed that they would release the Redstone for display purposes to a town. The Army stipulated that it would bear no costs in preparing or transporting the Redstone however. Ted then decided that if the Town of Warren did accept the Redstone, that he would bear the cost of getting it to Warren.

In 1971, the Town of Warren voted in the affirmative. After many starts and stops, Irving MacDonald of Dorchester, NH, as a driver and Ted, began the trek south with a semi-tractor and a 60 foot trailer loaned to them by Lew Brown of Wentworth & Holderness, NH. Arriving at Redstone Arsenal, the Post Engineers, after receiving a cashier's check, loaded the Redstone onto their trailer. All with Ted's past employees just shaking their heads!

They immediately began the 1300 mile trip north. After a stiff fine in Ohio for not having a permit, sucking it up while passing through other states for which they had no permits, taking the wrong route into New Hampshire and missing their escort, breaking down on Main Street in Concord, the Capital and having to be towed to the New Hampshire State House, the Redstone finally arrived in Warren, April of 1971.

It should be noted that the "welcoming committee" in Warren had a false start! When informed that the Redstone was approaching Wentworth, they jumped into vehicles and racing south, they soon discovered that the "Redstone sighting" was a local septic tank pumper from Wentworth! Ted knew at that point, that he had indeed been correct in bringing America's Space Program a little closer to Warren!!!

With the efforts of many, many volunteers and local organizations giving their time and funds, the Redstone was finally erected and dedicated by then, Governor, Walter Peterson in July of 1971.

So there you have it! The real reason behind Warren's Redstone Missile! The Redstone is one of the area's most photographed subjects, has been the subject on WMUR's NH Chronicles with Fritz Wetherbee and also holds a place in the book, "Roadside America."

Compiled and written by Bryan Flagg, as Told to him by Ted Asselin - 1996

Why A Redstone Missile